Current Projects
Bibliography of the Languages and Cultures of East Timor
For my sanity and the sanity of other researchers, I am compiling a bibliography (with aspirations toward annotations) of the sources in or about the languages and cultures of East Timor. Right now it is organized into individual languages and each page is posted periodically to my academia.edu page. Do you want to get involved? Send me an email, or fill out the Google Form!

Linguistic Landscapes: Dili, East Timor
Building on the work by Taylor-Leech (2012) on the linguistic landscape of Dili’s commercial hub, Timor Plaza, and McAlister (2012) on one of the major stretches of road in Dili, my project uses a similar framework to expand on these descriptions and to contextualize the many changes that have taken place over the last 5 years in Dili. of particular relevance is the increase of Chinese-language in commercial districts, and the changes in advertising regulations implemented in mid-2017.

Doctoral Research
Attitudes Toward Tetun Dili, A Language of East Timor
The social role of languages in East Timor and the attitudes of Timorese toward language are understudied subjects that have implications for the successful enactment of language-related policy. In recent years, policy changes have shed light on the complex relationship between East Timorese and their language(s), particularly regarding Tetun Dili. This relationship can be explored in terms of language attitudes, which are the beliefs and stereotypes held by individuals about language. These beliefs are situated within the larger context of societal language ideologies. My doctoral work used survey and interview data from Timorese participants to identify the major attitudinal trends toward Tetun Dili, and to situate those beliefs within the larger societal language ideologies of East Timor. The aims of this research are to contribute to the sociolinguistic literature in East Timor, as well as promote the idea that Tetun Dili itself is an important and legitimate subject of academic research. The conclusions of my research were organized into the following five content themes:

Past Projects
Language Attitude Surveys
I conducted a handful of surveys designed to gather language attitude data, specifically concerning language and education in Timor-Leste. You can see the pilot survey here and a rough analysis here. I don’t think it paints a very complete picture of the situation, so in July 2013, I went to Dili and did it again. A draft of the second survey writeup can be found here.

Analysis of the results of these surveys have been presented at the 4th International Conference on Language and Education: Multilingual Education for All in Asia and the Pacific – Policies, Practices and Processes in Bangkok, Thailand in November 2013 (slides), the 2nd International Conference on Heritage/Community Languages, at UCLA in March 2014 (slides) and at the 50th Anniversary of the Department of Linguistics Symposium at the University of Hawaiʻi at Mānoa (poster).

Language Maps
In addition to survey projects, I also administered a map task focusing on language use in the multilingual capitol city of Dili during my 2013 fieldwork. Very little sociolinguistic work has been done in TL, and a project like this will add to this scarce body of literature. Based on the model by Preston (1982, 1986, 1989) respondents were asked to mark boundaries on a map of Dili with major landmarks and roads pre-printed, indicating where they believe language is used differently around the city and specifying the ways in which they feel the speech within certain neighborhoods differ

s from other areas of Dili. An anecdotal stereotype of Dili is that migratory groups tend to settle in certain areas based on their linguistic affiliations. This task did not find these anecdotes to be factual but did demonstrate that Timorese in general have a very high awareness of language, and were 2/3rds more likely to label languages from outside of their own district than those of their own district. In addition, the frequency of map labels also corresponded to actual speakers populations, indicating that participants not only had awareness of languages from outside their areas, but also their populations. This research has been presented at the 13th Annual East-West Center International Graduate Student Conference on the Asia Pacific Region at the University of Hawaiʻi at Mānoa in February 2014 (slides).

In 2011-2012 I was fortunate enough to assist in a documentary project on the Kuman language under the direction of Lyle Campbell and Andrea Berez. Kuman is spoken by about 100,000 people in the Simbu Province of Papua New Guinea and is known for having exceptional lateral consonants. Our team of students, together with our Kuman speaker, ultimately produced a dictionary and several transcribed texts from this project.

In June of 2013, I travelled to Goroka, Eastern Highlands Province, PNG as a Research Assistant to Dr. Berez to continue this documentary project as well as explore a new direction of a linguistic work in PNG. I was selected to join the project because of my experience with digital language preservation and qualitative research on language attitudes. The new project will assess the potential impact of digital language documentation technologies for data collection, preservation, and dissemination on individuals, communities, and research institutions PNG. By understanding whether increased access to both creating and using digital language resources leads to increased participation by Papua New Guineans in language documentation and conservation efforts more generally, this project will lay the groundwork toward securing funding from the National Science Foundation (NSF) for long-term collaboration between the University of Hawaiʻi at Mānoa (UHM) and the University of Goroka.

Fieldwork Languages: Waima’a
During my early years at the University of Hawaiʻi, I  worked with a friend and Waima’a language speaker on a documentary project describing a sound change in progress. Waima’a is an Austronesian language of Timor-Leste, known for having an unusual and large (for an Austronesian language) consonant inventory. Through my interviews both at UH and in Timor-Leste, I gathered data to analyze and describe this sound change. My initial observations indicated that the more ‘marked’ phonemes are not present in younger speakers. Some data supporting this hypothesis were presented at the Workshop on the Languages of Melanesia 2013, in Canberra, Australia in May 2013 (slides). However, a follow-up field trip to the speaker community showed that this trend was not as clear as previously thought. Further research is ongoing! 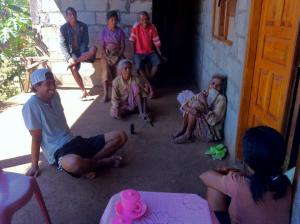 part of my Fulbright-Clinton Fellowship, I hope to use my interview data and experience with the language to develop early literacy materials for the mother-tongue multilingual education program recently piloted in Timor-Leste. More information about MTB-MLE in Timor-Leste can be found on the MTB-MLE Network or Former First Lady Kirsty Sword Gusmão’s website. More information about the Waima’a language, including a student project that I helped on, can be found on Pelagio’s page, Nelson’s page and through the DoBeS programme.